In this post we discuss the impact Coronavirus has had on the delivery of injury rehabilitation services and ask whether this is the beginning of the end for manual therapy? 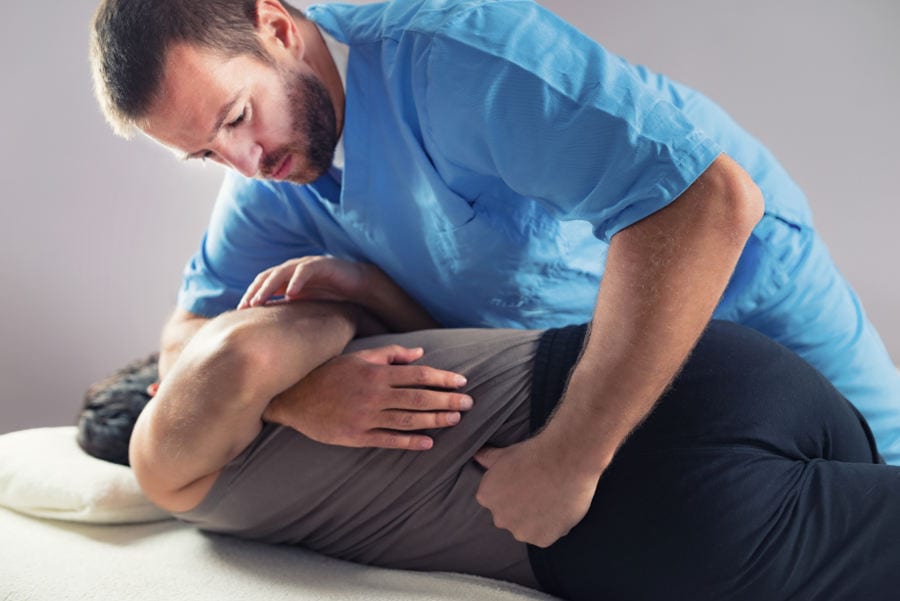 On the 21st of March the government closed all gyms and health centres in the U.K.

That decision may provoke a major shift in how injury rehabilitation services are delivered for good.

In the coming months it’s possible we’ll see a re-evaluation of the value passive treatments such as massage, acupuncture and chiropractic adjustments provide.

Not necessarily from the practitioners who deliver them, but more likely from the consumers who access them on a regular basis.

Across the world businesses have been forced to adapt to the secondary effects of this virus at an unprecedented pace.

Everything that can be delivered online is being tried and tested and that includes health care.

Whilst the fitness industry has been moving in this direction for some time, the rehab world has been slower to adapt. Perhaps due to the belief that a physical examination is a requirement for high standard care.

Necessity is the mother of invention however, and because of these unique circumstances, practitioners have quickly moved to refine their online assessments and embrace so called telehealth services.

Working online presents challenges of course and it would be inaccurate to say the experience for the patient is exactly the same. There may be significant advantages however.

Manual therapy is obviously out of the question, so it forces practitioners to provide both exercise and education as the primary intervention.

This single factor will, I believe, lead to a positive change in how future injury rehabilitation services are delivered.

The hidden dangers of manual therapy.

Generally the more force that’s being applied by the practitioner, the greater the risk to the patient.

Because of this Chiropractic adjustments carry the most risk. In particular manipulation of the neck.

A 2010 study found 27 deaths were caused by tears to the vertebral artery and subsequent strokes following such adjustments.

Whilst a survey of 43 studies conducted over a 10 year period between 2001 and 2011, found 707 incidents of strokes associated with cervical spine manipulation.

A brief look at YouTube and the type of manipulations being demonstrated there, will have you wondering why there are aren’t more.

Despite this, Americans visit chiropractors over 250 million times a year. Just under a third of those visits will involve manipulation of the neck. This represents some 75 million adjustments.

The risks therefore are still relatively small, but then so are the benefits. A recent Cochrane review of its effectiveness for acute lower back pain, found it no more effective than sham (fake) treatments or other recommended therapies.

Likewise acupuncture can have unexpected consequences. The most extreme of these being pneumothorax or collapsed lung.

Acupuncture treatments given on the NHS over a three year period resulted in 325 patient safety incidents. The most common reported adverse affects were sensations of dizziness (30%) and a loss of consciousness (19%).

Some of these incidents required assessment by Accident and Emergency staff and 6 were thought to be the result of a minor seizure.

It’s also worth noting that these treatments were provided by NHS staff, whose training may be more rigorous than most. Acupuncturists outside of the NHS are not required to undergo formal training in order to practice.

There currently isn’t strong evidence that acupuncture is effective for the many ailments it is commonly used for, including chronic pain conditions.

Massage is often viewed as a benign practice. This largely depends on the pressure used by the practitioner however.

Strong massages are capable of producing crush injuries to muscles and a mild form of something called rhabdomyolysis. This is essentially poisoning from the liberated proteins of the affected muscles.

This may explain the adverse effects sometimes felt after a particularly strong massage, such as soreness and mild fever.

Severe effects have been noted in more vulnerable patients with one particular case that is often cited in the literature.

Press hard on any particular part of the body and you may cause injury, especially if what’s underneath your pressure is a nerve or a blood vessel.

These incidences are thankfully rare but should be considered by patients and practitioners alike.

Whilst severe complications from manual therapy aren’t common, perhaps the largest negative effect of all these treatments is the opportunity cost.

What position would the individual be in if they had chosen a different direction?

In patients with chronic back pain for example, the strongest evidence exists for a combination of both exercise therapy and education.

If patient A chooses that path, whilst patient B decides on regular visits to a chiropractor for example, where are they on their respective journeys at 6 months or a year?

It’s reasonable to assume patient A will make some type of progress. They may improve their strength, gain muscle, perhaps reduce their blood pressure, or improve other significant health markers.

Where is patient B after this time? I would argue pretty much in the same position and as a result worse off.

It’s this that I hope the current circumstances will help to illuminate.

If practitioners are forced to deliver their services in new ways, which also have a stronger evidence base, patients may realise that their reliance on manual therapy is misplaced.

I think every health care professional chooses their career because they want to help people. As Upton Sinclair said however, ‘it’s very difficult to make a man understand something when his salary depends on his not understanding it.’

Sometimes change only comes when it’s forced upon us. A change in how we deliver injury rehabilitation services, and therefore what we deliver, might be one of the few positives to emerge from these awful circumstances.