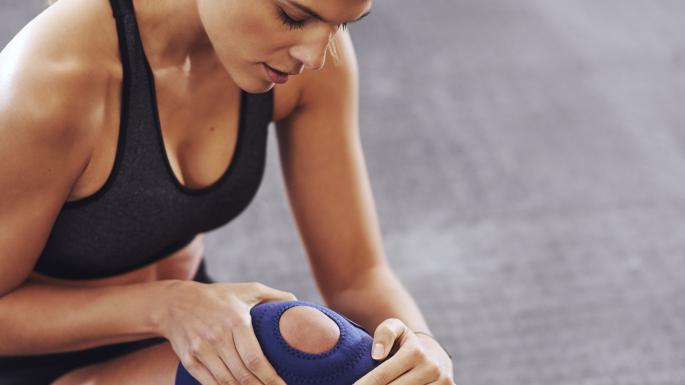 What thoughts enter your mind when you see the words pain and weight training?

A bad training experience perhaps. An injury, or a session that was too difficult for you at that particular time.

Maybe though the two are synonymous. It’s not a single experience that you think of but rather one leads to the other.

You train, you get pain.

Sometimes more, sometimes less and not always in the same place, but the connection is undeniable.

Is it OK to have pain after weight training?

Pain is an experience. It’s generated by your brain and is fundamentally a warning system. It’s also affected by lots of things that are not directly related to exercise such as sleep and nutritional status.

That’s why the exact cause is a little difficult to pin down sometimes.

It’s generally classified into either acute or chronic. These terms can be a little misleading but suffice to say an ankle break would be considered acute. The shoulder thing you have that never seems to go away would be classed as chronic.

I think we can agree there’s no doubt acute pain is bad and is a sign something has gone seriously wrong.

Not many people break their ankle and wonder if this is a normal response to exercise. Obstacle racers aside.

The chronic situation is more nuanced and I think this is where the water gets muddy.

What exactly are your goals?

These are important to establish. If you’re training for elite sport or if you’re in the military, pain is likely to be part of the process.

Most athletes are in some degree of pain. Whether this is necessary is another blog post altogether, but performance is their primary goal, not long term health and function. Watch the recent Ronnie Colman documentary for an extreme example of this.

Likewise in the military, learning to tolerate pain is an integral part of the training process. They are focusing on survival skills in extreme conditions. A sore shoulder is neither here nor there if somebody is shooting at you.

Providing you are neither training for the Olympics, or volunteering for a tour of Afghanistan, should you accept pain as an inevitable part of weight training?

It depends on the location of the pain and it’s severity.

Pain from a muscle.

I’m sure you’ll be familiar with the soreness that sometimes occurs after a bout of unaccustomed exercise. The pain is usually felt in or around the muscles and peaks some 48 hours after the activity that provoked it.

The exact cause of delayed onset muscle soreness or DOMS is still not conclusively known. It may have a muscle damage component, although studies have shown there is poor correlation between the two.

Whatever it is exactly, it’s best to conceptualise it as a micro injury.

Again, the necessity and the potential consequences of exercising to the point where this occurs is a separate blog post.

I do everything I can to avoid this effect with my own clients and I don’t recommend people seek it out in their training.

In the context of this post however, it is probably the only instance where pain following exercise is to be considered acceptable. And even this comes with the caveat of treating this response like an injury.

That means not training the muscles affected until they have fully recovered. This can take up to 3 weeks in some cases.

Pain from a joint.

Pain from an area either close to or seemingly inside a joint is a signal that you’re making training errors.

Either too much force is being applied, or joints are being taken into ranges that your muscular system has limited control of.

Let’s take a look at some examples.

I guess you would be reluctant to try and deadlift 200kgs. Especially if you hadn’t trained for it. You understand that may lead to an injury.

What’s interesting is that we don’t seem to recognise that the joint issues we experience after a workout are the same thing but at a lower level.

The misleading part is that you may be able to complete the exercise and even walk out the gym feeling good. The joint pain afterwards suggests something was overloaded however.

That overload may not even relate to the weight that you use but rather the way you used it.

Did it require more effort to catch the second time? Exactly.

Now picture the same effect but with a weight in your hands. The rapid acceleration and deceleration will cause spikes in force that, if not adequately controlled by your muscular system, will cause joint issues.

Issues are also commonly caused by having an external force take you into a position you can’t take yourself into.

The bar will keep going towards your chest unless you stop it. It has no regard for how much range of motion you have at your shoulder.

That’s why you need to measure it first.

The crucial range to check is how far you can take your elbows towards the floor. This post will explain in detail how to measure it.

The same principle applies to every exercise you apply in the gym, be it a squat, pull up or a bicep curl. Always measure exactly how much active range of motion you have available before the exercise and ensure the weight doesn’t take you further.

Weight training should not cause pain. If it does that’s an indication something is wrong.

In most cases this is either related to excessive force being applied, or errors in how the exercise is set up.

Pain free exercise is not only possible but desirable in terms of the results it produces.

That doesn’t mean there won’t be effort during a session and some level of discomfort. The locus of that should be entirely within the muscles however.

Anywhere else and something isn’t right.