How to train your adductors for rehab and sports performance.

In this post we take a detailed look at how to train your adductors for both rehab and sports performance.

And why the adductors seem to be so undervalued in both. 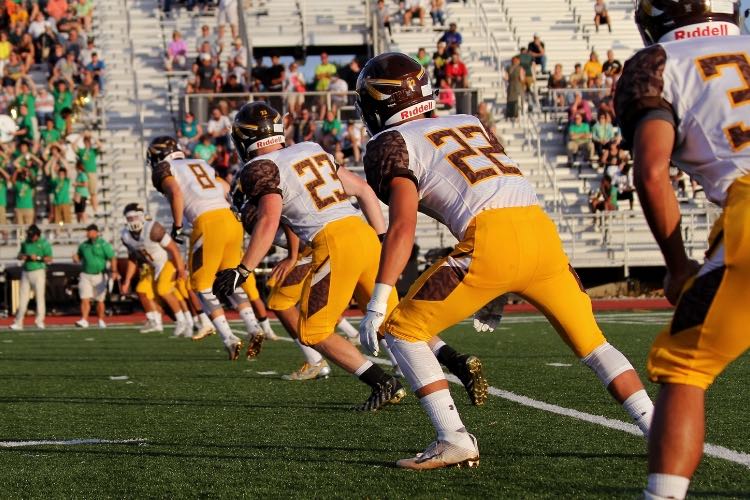 In rehab and exercise more generally, there tends to be a bias towards stretching some muscles and strengthening others.

These are usually the same muscles for everybody.

These simplistic, protocol driven approaches are usually based on the position of our joints (postural assessments), or what we tend to do for most of the day (sit in front of a computer).

Not only is this paint by numbers approach misleading, it also results in some muscles being undervalued.

One such group of muscles is the adductors.

A good indication how important a group of muscles may be is their size and number.

Pop your hand on the inside of your thigh near the top of your leg and grab a handful of tissue. That entire bulk is made up of your adductors.

The most fascinating of them all has to be adductor magnus. This triangular shaped muscle is the second largest in the lower body after Glute Max. 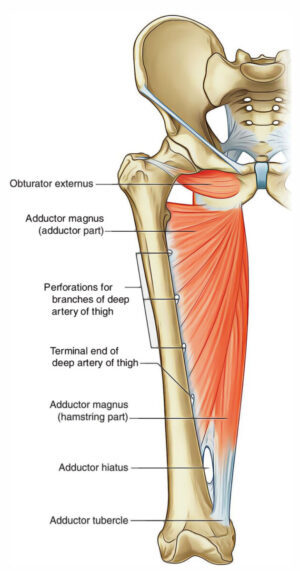 It fans out from its origin on the bottom of the pelvis (the pubis and the tuberosity of the ischium), to insert on the inside of the femur and on the adductor tubercle close to the knee.

Adductor magnus functions as two distinct muscles. An adductor portion, and what is commonly called a hamstring portion.

As a result it’s capable of adducting your hip (bringing one leg towards the other), flexing your hip, extending your hip and both internally and externally rotating it.

It has four small tendinous arches close to its attachments on the femur, through which branches of the profunda femoral artery passes.

And to top that, it also contains a large hole nearest the knee called the adductor hiatus. This allows both the femoral artery and the femoral vein to pass directly through it, on their way to the popliteal fossa behind the knee.

I promise I’m not making this stuff up.

As their names suggest, all of the adductors will bring your thigh from an abducted position (leg out to the side) back towards your other leg.

With the exception of the so called hamstring fibres of adductor magnus, all will flex your hip from a neutral position. The majority produce internal hip rotation, whilst adductor longus is also capable of producing external rotation, due to its posterior attachment on the femur.

Because of their attachments on the bottom of the pelvis, they also have an influence on pelvic stability.

Why your adductors are important.

So that’s cool but what does it all mean in terms of function? 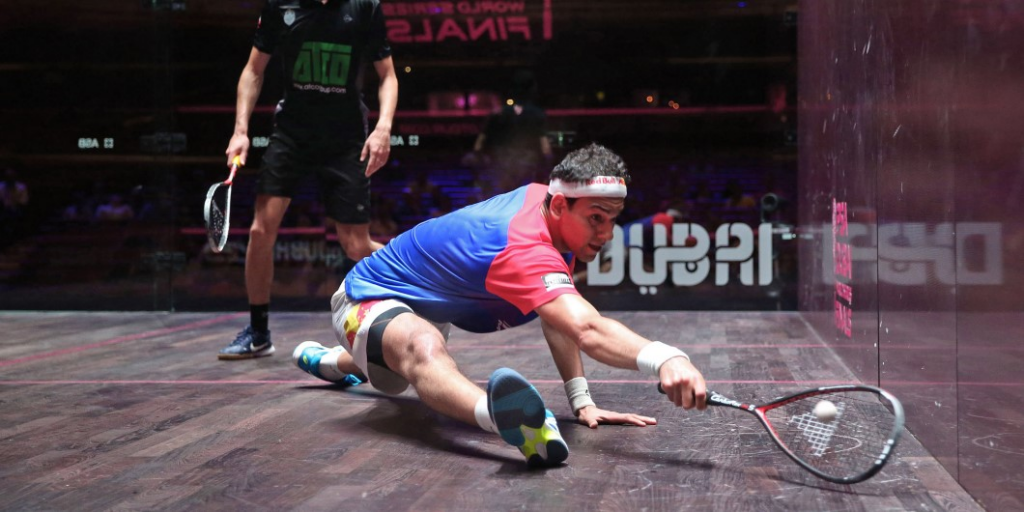 It’s probably not difficult to see how your adductors would be important for sports that require you to return from side lunging positions such as tennis, squash or badminton.

And for those that require rapid acceleration, deceleration and change of direction like football, rugby, or hockey.

They’re not just important for sport however.

I’ve written before how critical hip flexion is to our daily lives. You wouldn’t be able to walk, run, or move up stairs without it. Your adductors are significant contributors to this motion.

The majority also produce internal rotation of the hip, which is an important component of pronation. This is a series of joint motions that enables you to absorb forces from activities like walking, running and jumping.

In addition the adductors provide a counterbalance to the powerful hip extensors. Without flexion and internal rotation of the hip, you wouldn’t be able to adequately lengthen and load your glutes.

Interestingly a recent study found the adductors grow at a similar rate to both the quadriceps and glutes when loaded in a squat exercise. More so from a deep squat position, where the majority of them become hip extensors.

Why the adductors are thought of as tight and in need of stretching.

I think this is partly due to the research on knee injuries and flawed assessments such as the single leg squat.

Some studies have found an association between increased hip adduction angles during walking and running and the existence of a variety of knee injuries. These include iliotibial band friction syndrome (ITBS), patellofemoral pain syndrome (PFPS) and osteoarthritis of the medial compartment of the knee.

Whilst most of the research has focused on training the abductors to control this motion, it seems some coaches, trainers and therapists have made the leap that stretching the adductors will also help.

There is no evidence that this approach has any effect on these issues.

The single leg squat is still used as a movement screening tool to assess stability and control of the hip and pelvis in a single leg stance.

If your knee dives inwards during the test, the response of the examiner is usually to diagnose weak hip abductor muscles and tight adductor muscles.

As this video explains however, that likely occurs because your brain is attempting to maintain your centre of mass over your base of support, rather than being indicative of tight or weak anything.

Performing a single leg squat doesn’t really tell you why any particular movement is occurring. It just tells you it is.

Take a look at this video of a client who was complaining of left hip discomfort whilst walking as an example.

Subjectively his left foot appears to be toeing in a little as he walks and he seems more unstable on his left side.

On the treatment table he had a large limit in left hip internal hip rotation.

There is nothing in how he was walking to suggest this might be the case. If anything the position of his foot would suggest an external hip rotation limit.

I filmed him walking again after restoring his left internal hip rotation. Again this is subjective, but his left foot is no longer toeing in and his gait looks more fluid. He reported feeling more stable through his left side.

Whilst this proves little, what it does demonstrate is how difficult and misleading assessing a multi joint task such as walking or running can be.

Diagnosing a muscle group as tight simply because a joint is moving in a particular direction is inaccurate and unreliable.

So should you train your adductors?

I’m sure you know what I’m going to say if you’ve read this far.

Training a muscle group the size of your adductors will provide enormous value.

Whether you want to improve your sports performance, your squat, reduce your risk of groin injuries, keep your knees healthy and pain free, or just move better, focussing on improving the strength of your adductors will help.

Below I discuss both home training and gym based options.

Home exercises to target the adductors.

We know that the adductors are all involved in adduction of the hip. If you want to challenge them this is one of the most effective motions to load.

If you’re unable or perhaps unwilling to visit the gym at the moment, the following isometrics can be used at home to target your adductors.

They include varying degrees of hip abduction and hip flexion to provide a comprehensive challenge.

You can also add both internal and external hip rotation to assess for positions that might be weaker than others.

Providing the contractions cause you no pain or discomfort, ramp through the following intensities pausing for 5 seconds between each. 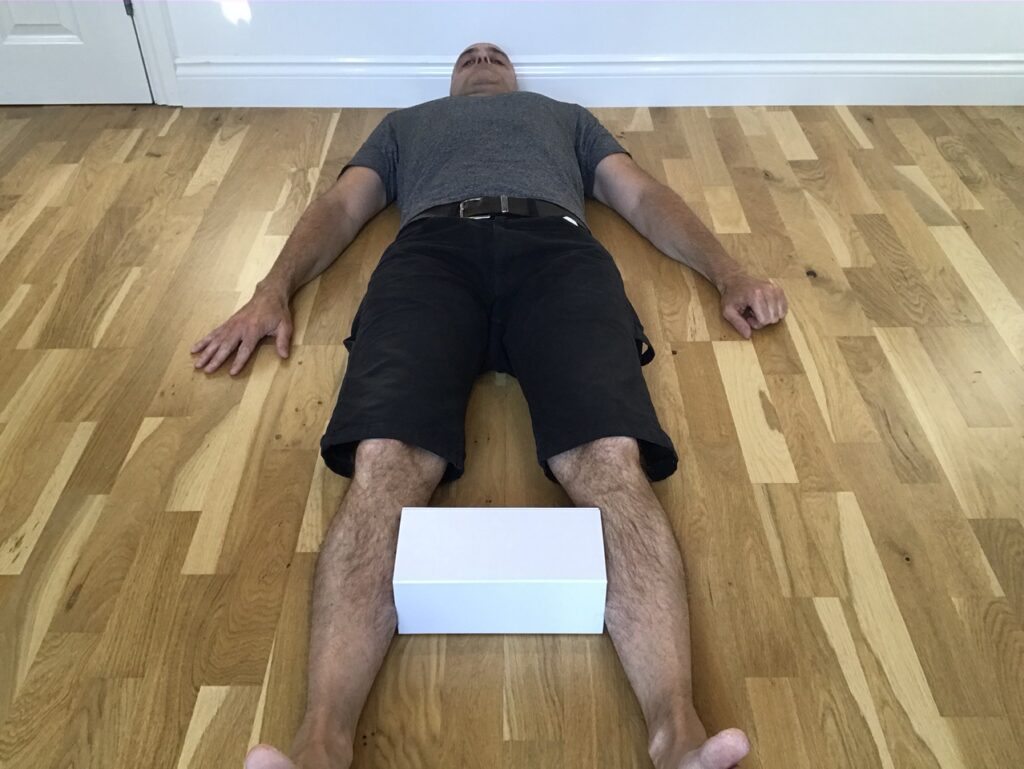 Lying on your back, place an object between your lower legs.

Push both legs inwards, focussing on your adductors.

From the position above take each leg out to the side 15 degrees.

Squeeze both legs into a suitable object placed between your lower legs, or perform them individually.

Move your legs further out to the side providing you have that range of motion available.

Again squeeze into a suitable object or perform them individually. 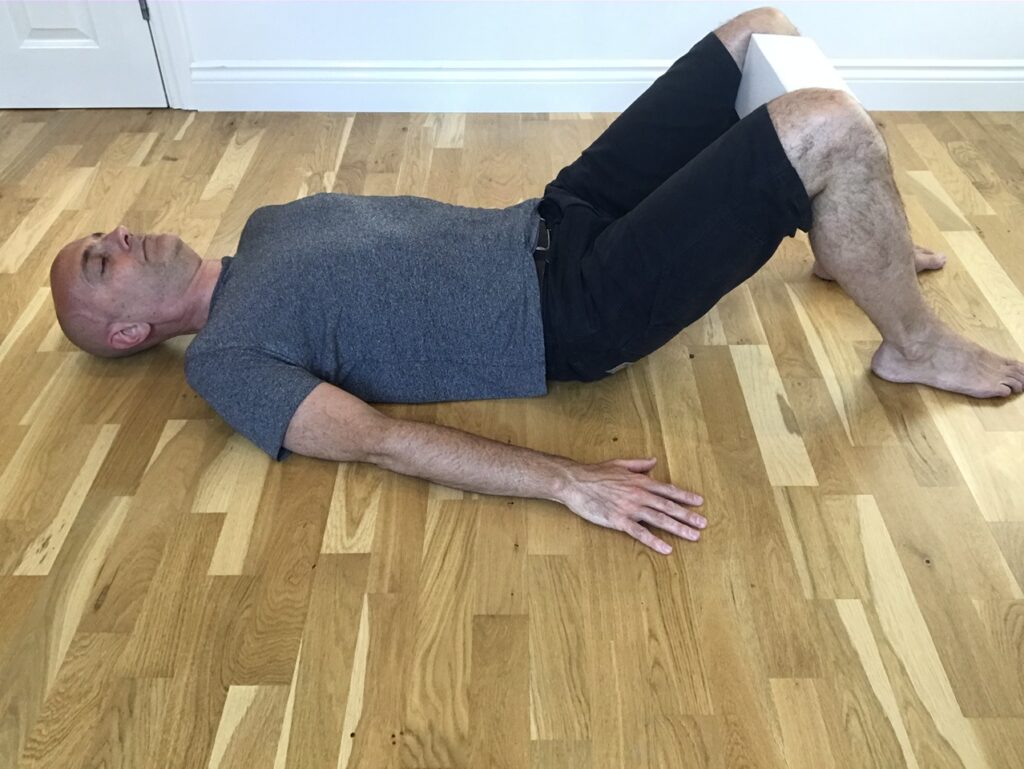 Now bend up your knees so your hips are at 45 degrees.

This time squeeze your thighs into an object placed between your knees.

As above but take your legs apart as far as is comfortable.

Gym based exercises to target the adductors. 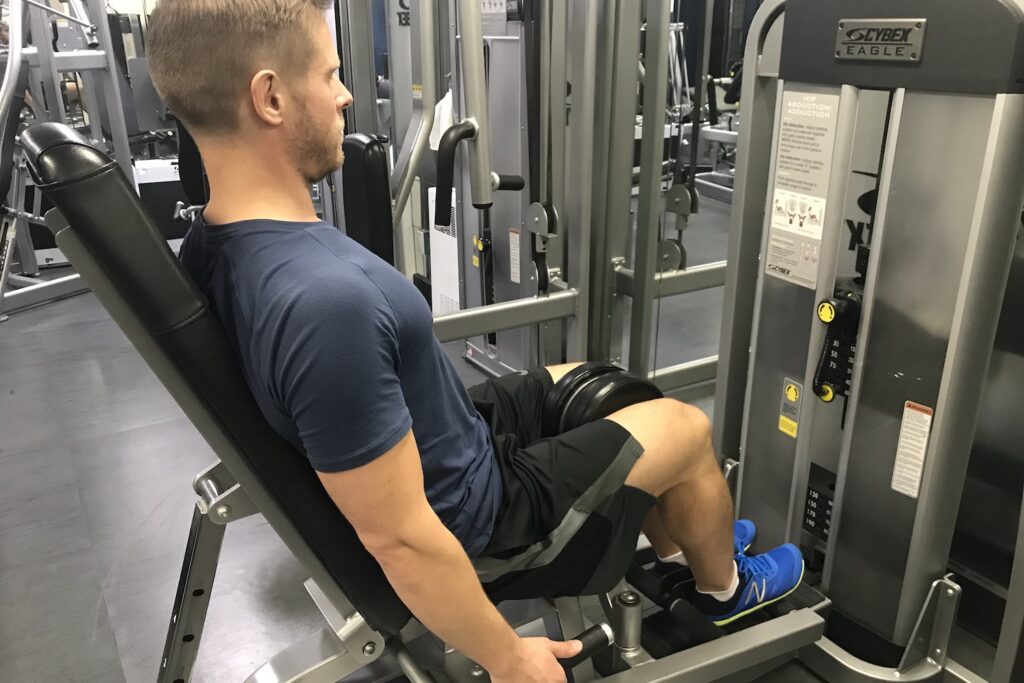 If you’re lucky enough to have a hip adductor machine in your gym then this is a great option to strengthen your adductors.

I’ve written before that these machines are the most misunderstood in any gym. My male clients often joke they’re the only men using them. That tells you everything you need to know about the state of education in the fitness industry.

Better machines will allow you to alter the position of the back rest which changes the hip flexion angle you’re working in.

The is useful because it enables you to train your adductors in the position they most frequently work when you run or walk.

If the machines in your gym don’t have that capability, use a couple of yoga blocks to bolster the seat. This will reduce your hip flexion angle a little and provide a different stimulus.

The biggest mistake people make when setting these machines up is to force their hips passed there active range of hip abduction. This is usually done by raising themselves off the seat and cranking the pads out to the side. Don’t do this.

As with any exercise, having an external resistance take you into a position you don’t have muscular control of can lead to issues.

The adductors are certainly the most undervalued muscles of the lower body in both rehab and sports performance.

Training them will improve your performance in many different activities and help you both recover from injury and avoid it in the first place.

Find out why and how to get moving with our FREE 21 page guide.

How to use resistance training to recover from injury and improve your performance. 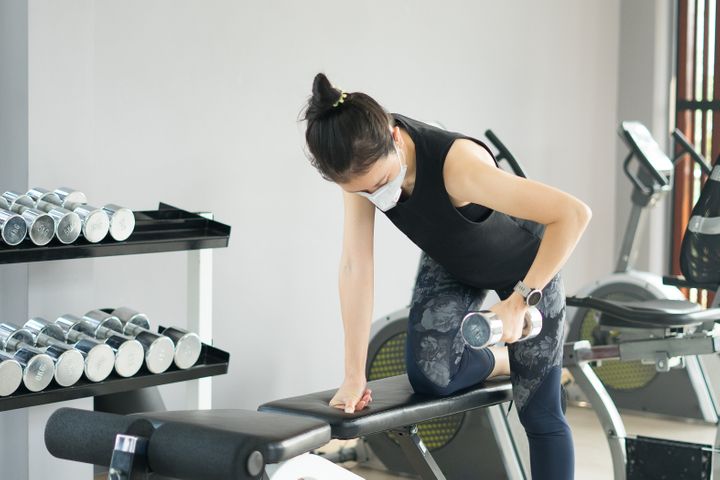 What impact will Coronavirus have on gyms and how we exercise?

What impact will Coronavirus have on gyms and how we exercise?