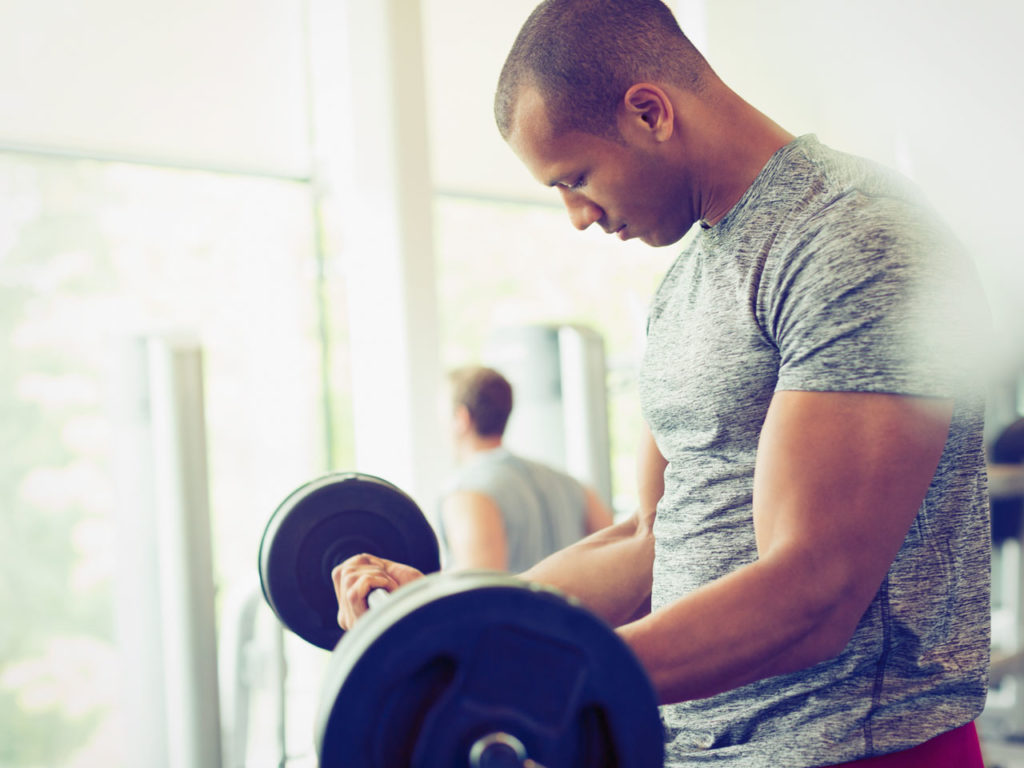 Both of these muscles have an influence on shoulder function that’s not usually considered in shoulder injury rehab programmes.

We’ll also look at how best to challenge both the lateral and posterior fibres of the deltoid muscle.

The long head of biceps. 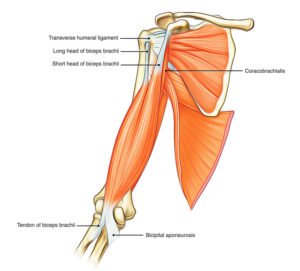 Because of its attachment above the shoulder (glenohumeral) joint, the long head plays a role in managing the position of the humeral head during shoulder motions.

it’s been shown to resist anterior (forward) superior (upward) and inferior (downward) movement of the humeral head when a force is applied to its tendon.

The long head is also involved in creating the motions of shoulder flexion and abduction.

Although it’s primarily thought of as an elbow flexor, rupture reduces elbow flexion strength by only 16%, whilst there’s the same decrease in shoulder abduction strength. 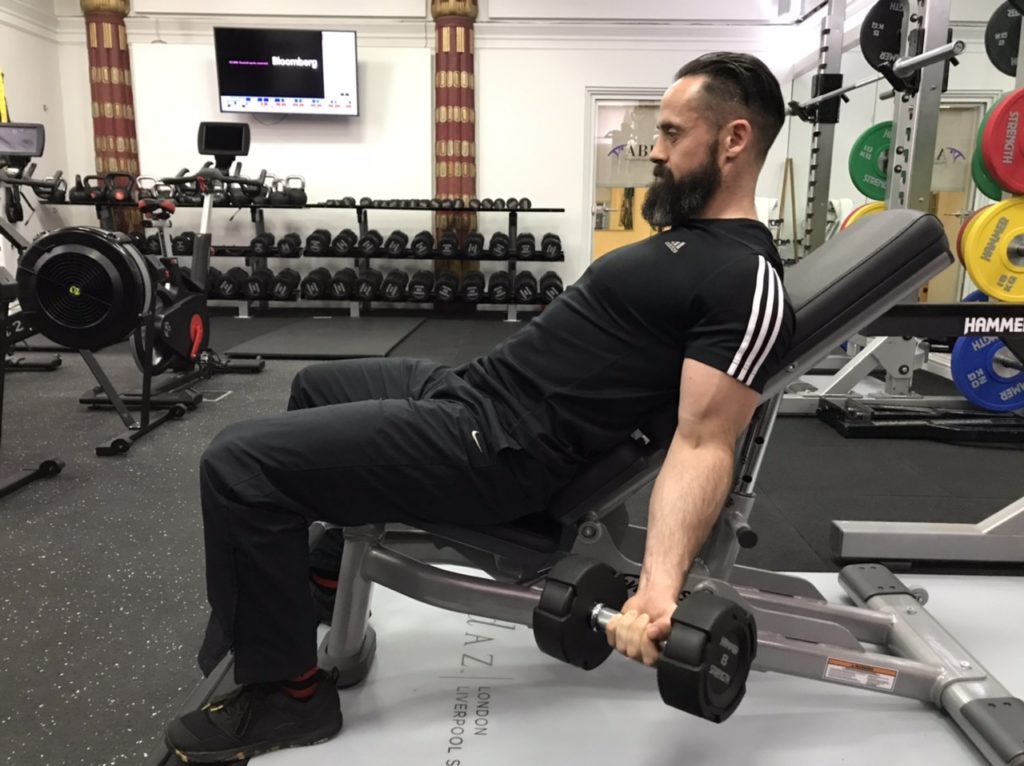 As this muscle flexes the shoulder, you’ll need to place your shoulder in a degree of extension to train it over its available range. This is easily achieved from an inclined bench.

Measure how much active shoulder extension you have available by laying on the bench and taking both arms backwards.

Note the higher the bench, the less extension you’ll be in.

Once you’ve found a comfortable shoulder position, assess how far you can straighten each elbow with your palms facing up (forearm supination).

Don’t let the dumbbells take you past this point during the exercise.

Select a relatively light pair of dumbbells and begin to curl them up towards your upper arms.

Once you’ve reached the top position, slowly lower them back down to the starting point.

Ensure your shoulders remain static throughout.

Choose a weight that brings about fatigue between 6-8 repetitions.

The long head of triceps. 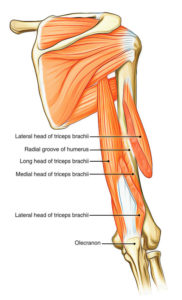 The long head of triceps attaches to the scapula (shoulder blade), so it also has an influence on shoulder function. In particular extension of the shoulder (glenohumeral) joint.

Studies have shown it to be most active at 0 degrees of shoulder flexion (arm by your side) when compared to 90 degrees (arm at shoulder height) such as in a tricep press.

Hence the shoulder position of the recommended exercise below. 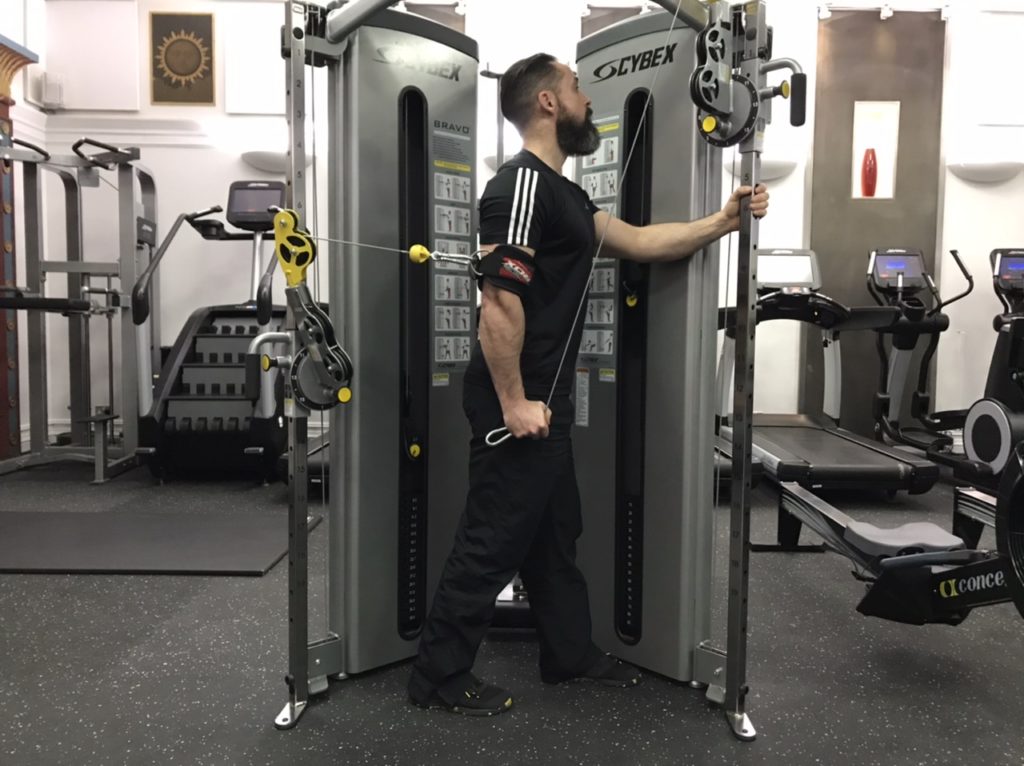 Perform this exercise single sided with the cable as shown.

Here we’re also using a stabilising force from the opposite cable stack. You may find you’re able to produce more force with this arrangement.

Keep your shoulder perfectly still throughout. Note the closer you are to the cable stack, the easier the last few degrees of elbow extension will be.

Hold on to the machine to stabilise your trunk, it’s the elbow extensors we’re focusing on, nothing else.

The deltoid is a fascinating muscle. Whilst it’s generally described as having three divisions, anterior, lateral and posterior, studies have shown it’s actually comprised of seven distinct sections.

For the purposes of this post we’ll describe exercises for the lateral and posterior sections, having already trained the anterior sections with the pressing motions in Part 3.

Bear in mind that subtle changes in glenohumeral rotation will bias different divisions.

If you had problems achieving 90 degrees of shoulder abduction for the rotator cuff exercises in Part 2, the lateral fibres of your deltoid muscle may need some attention.

To test if this is the case, hold the top of your acromion process (top of your shoulder blade) with your other hand, whilst bringing a bent arm out into abduction.

You should be able to achieve around 80-90 degrees of abduction (elbow almost level with your shoulder) before your scapula begins to move.

If your arm stops below 80 degrees, use the following isometric to make improvements. 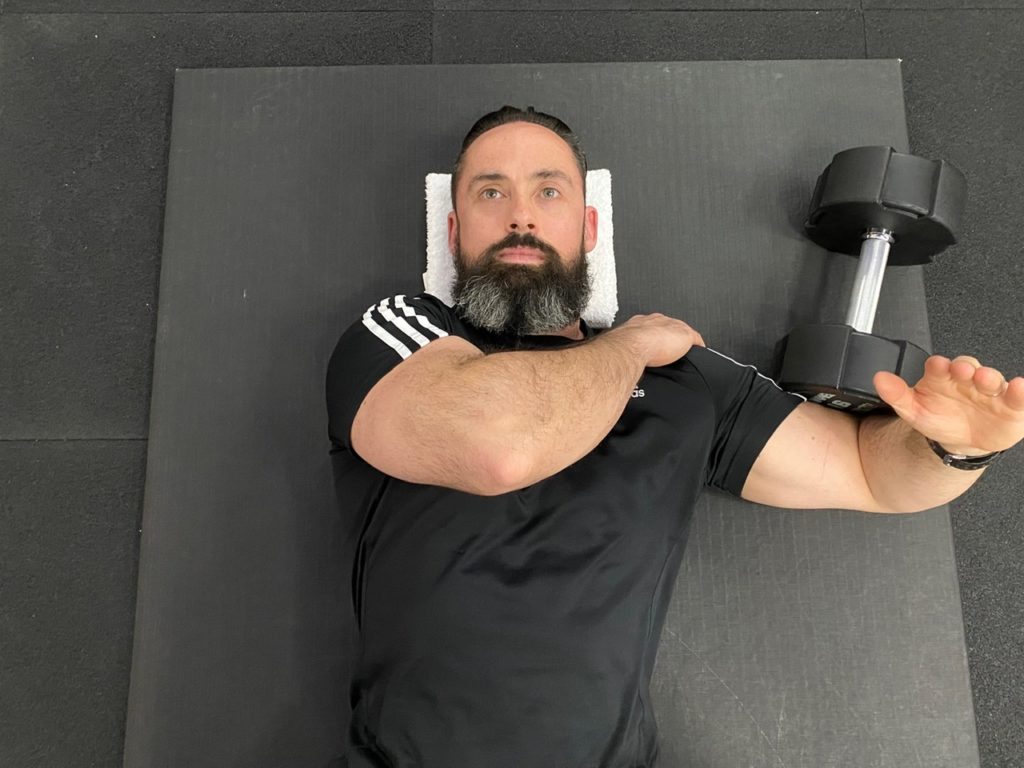 Lay on your back with your target side elbow bent to 90 degrees. Slowly slide your elbow out along the floor, making sure your shoulder blade doesn’t move upward.

Monitor this by placing your other hand on the top of your shoulder. If you feel your shoulder blade begin to move, stop and move your arm back towards your side a little.

Now place an immovable object on the outside of your upper arm as shown.

Gently push your arm into the object as if trying to slide your arm towards your ear, each time focusing on the lateral aspect of your shoulder.

Hold for 5 seconds and repeat 5 times. 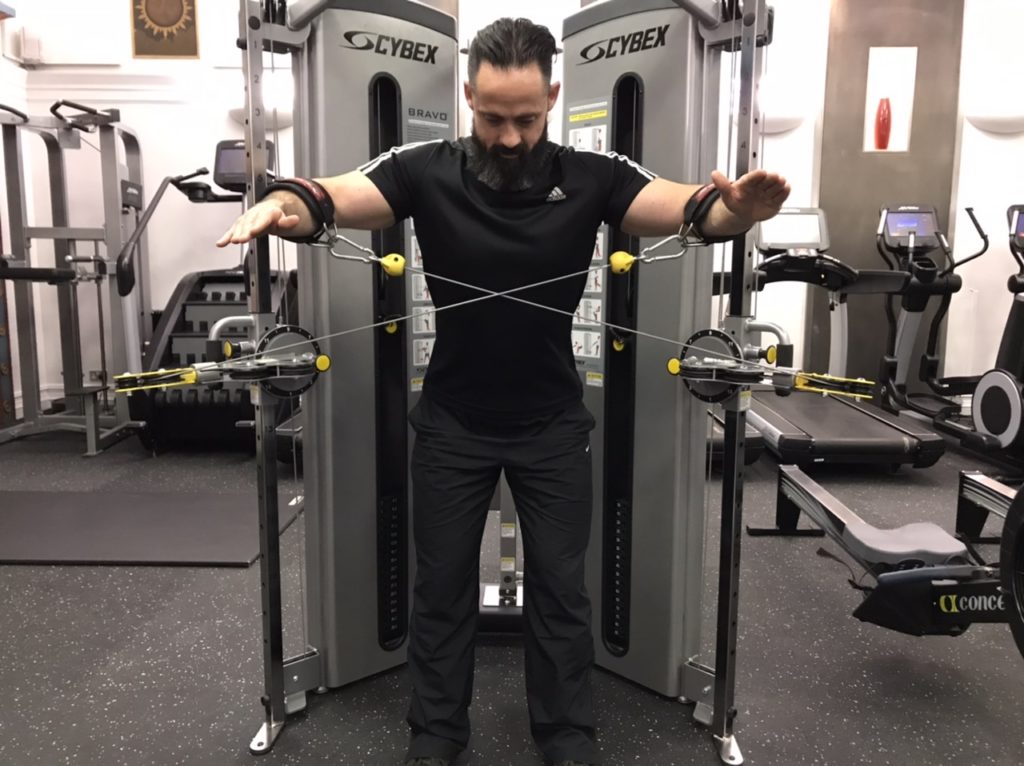 Once you’ve improved the function of your lateral deltoid you can add load it with the following exercise.

Note the position of the cable. This reduces the moment arm to your shoulder as you near the top position where you are comparatively weaker.

Use cable attachments placed just below your elbow and pitch your trunk forward slightly to bring the lateral fibres of the muscle directly in the line of force.

Stop when your elbows become level with your shoulder, before slowly returning to the start position.

Whilst the posterior deltoid contributes to a seated row, the reverse cable fly enables you to explore its available range of motion further. 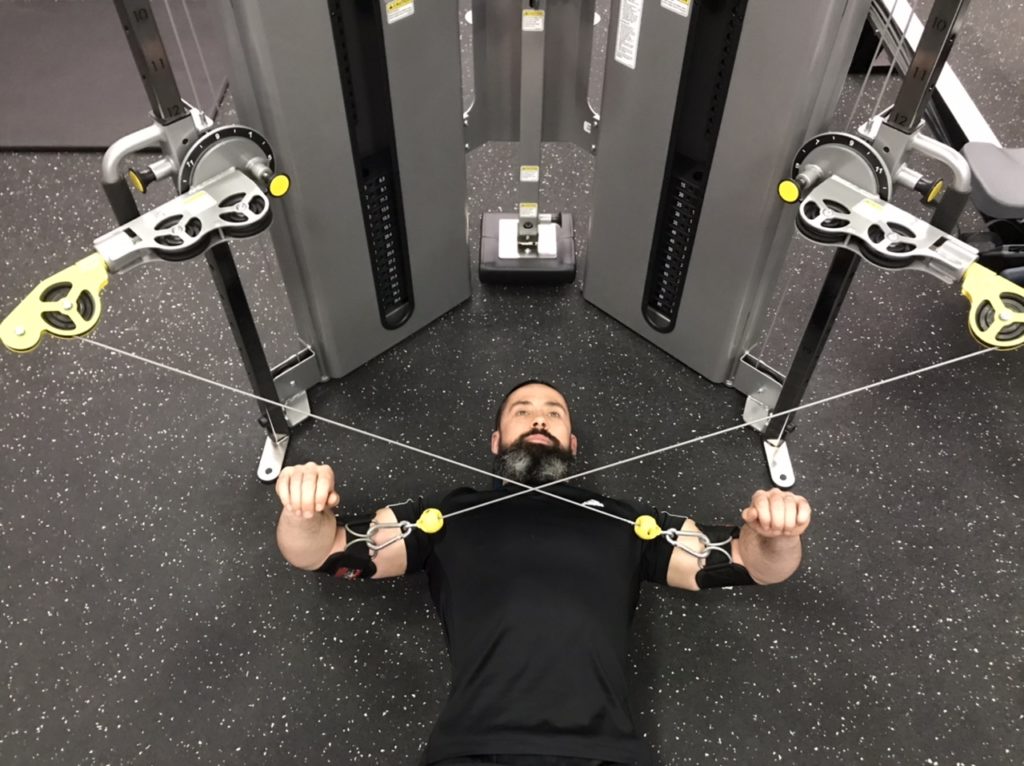 Again note the position of the cable. This will ensure you’re having to overcome less resistance as your elbows near the floor.

Keep your shoulders at a around 80-90 degrees of abduction and push your chest towards the ceiling as you contact the floor.

We’re using a posture pole to enable a greater range of motion. Make sure you have that available before you begin however.

Additionally ensure the cable doesn’t bring your arms further inwards (adduction) than they can go by themselves.

So there you have it, a relatively comprehensive 4 part guide that will hopefully have your shoulder injury moving in the right direction.

If you have any specific questions, feel free to use my contact page to get in touch. I’d be happy to hear from you.